Within the framework of the exhibition “Art perfum, the perfum as a tool of art”, We have great pleasure to participate in the second workshop “Live Live” del Textile Museum and Documentation Centre Terrassa. A unique opportunity to be part , for a few hours of the museum team , in front of extraordinaries pieces , in this case some embroidery monastic.

Smells made or not, have been part of any historical moment, variant with the label that defined: medicina, witchcraft, perfumery… This workshop will deal specifically, smells characters shields that Europeans used before the great plague that fell so drastically and tools and dissemination methods.

A monastic embroidery; an archaeological pieces ... we put on the track of the fact that during the fourteenth century ravaged Europe: Plague, also known as "the Black Death".
In a very sensory experience, know how people of different social classes tried to protect against this scourge.

By : Textile Museum and Documentation Centre of Hope and Homes, artisan perfumer.

The workshop was a very complete experience, for my part I was impressed with the care, the knowledge and passion transmitted by the people of the CDMT of Terrassa, especially its director Eulàlia Morral who with her deep knowledge captivated all the attendees. 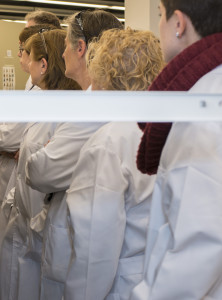 It began in the library in front of the piece presumably by Maria de Padilla, lover of Pedro I of Castile that died of the plague shortly after being officially recognized Om to wife of the king with whom already had five children.

Following this information was shown how to take a look at other related pieces through imatex, a museum computer medium.

Then we dressed in gowns, we put on the gloves they offered us and accepted a thread counter to continue the visit, but now as if we were part of the museum team.

In the reserve we were able to see the little-known work of the museums, one that allows the dignity of the pieces on display, safeguarded by men and women doing shadow work, with fewer resources than would be needed to secure these views of history. For my part, I was surprised by the silk bouclé and the cheeky sense of recycling that made them put pieces together without hesitation..

As for the second part, they saw how?, with what?, and because the people of Europe in general tried to cure themselves of the plague with fragrant substances. We reviewed the story, to detect amber apples, their role, its content, its origin and especially what it smelled like.

Of the civilian population, we moved into the church environment with its main queens, at the sight of a spectacular botafumeiro which the Museum projected into a stained glass window.

Finally we prepared the formula of the “Vinegar of the four thieves”, as discovered by Mr.. Maille before marketing it as a remedy for almost all ailments.

Photographs of the activity were provided by the Museum, I appreciate the pictures.