Survey participation in the Plaza of the town of Tyana 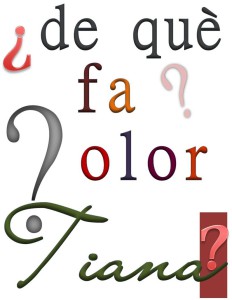 All people, big and small, who came to stop’ “El Jardí Secret"During the Merchants Street Fair del 10 th 2011, were asked: What did smell Tiana?
Of 78 people who filled the paper with his findings or memories came these results:

Probably, if we had left more time to think, in some cases the answer would have been another, or at least, answers would come out with more conviction because, although we can detect more than 10.000 smells , not usually have olfactory memory because we have the habit of educating the. Often we lack words to describe smells that we constantly around us.

Thus we see that smells "Concretes"how: la terra humida; wine that was made at home; freshly baked bread; the fireplace, others, is above normal grabbers such as fragrances: the "flowers (flors)” , els “trees” i les “Herbs"Especially aromatic.

In between the "feelings" hide under a variety of labels olfactory: tranquil·trusted, bona Gent, post, my house, lifetime, are complex when describing.

Finally, the "generic" group that can change according to odor perception of time and that are connected to the summer, al vent,freshness of the morning, a Manlleu…

The truth is that Tiana has a lot of fragrances, any and all make it unique, especially by those who live. Not until we are far, do not know what smell suddenly take us to encounter each one of us, directly to the Town of Pines New.